McCleary introduces the concept of a differential graded algebra in section 1.3 (Definition 1.6, p. 11). These are algebras (over a field

-graded, and importantly carry with them a map

called a differential which is

-linear, shifts the degree of elements (in the grading) up by one, and satisfies a “Leibniz rule:”

. This is a twisted version of what is usually called Leibniz’ rule in calculus (which is basically just product rule), which coincides with how the differential works in the algebra of differential forms.

, where now the elements are

graded (for the time being, later we’ll have

remains a total-degree 1 mapping. That is,

A standard construction is to form a bigraded algebra by tensoring two graded algebras together. This would work with just component-wise multiplication, but to get a working differential that satisfies our version of the Leibniz rule 1 as well, we introduce an extra sign: we mean, supposing

are differential graded algebras, then we can assign

Then if we define a differential

satisfies the Leibniz rule 1. It is clarifying to check this, so we’ll record it here. Switching notation a bit, we will write

Now applying the multiplication rule 2 and distributing, we find

To check the rule holds, we perform this computation by instead multiplying first and then applying the differential. That calculation looks like

shows that terms of the last line above match with those of 4, so everything checks out and

Given the length and detail of section 1.3, surprisingly we find no glaring errors in this section, but the use of the differential becomes somewhat muddled in calculation in section 1.4. Again, perhaps as an undesirable side effect of the fact that we remain at the “informal stage,” it’s always difficult to keep track of what assumptions we’re working with in each example. Case in point, example 1.H, p. 20. The paragraph preceding definition 1.11 seems to indicate that all graded algebras are assumed to be graded commutative — at least for the rest of the section, one guesses, though the language is vague. Let’s try this here with a bit more force.

Assumption: All graded algebras are graded commutative for the rest of the post. This is to say, for all

. Now let’s have a look at the example. We suppose a spectral sequence of algebras

, converging to the graded algebra

in all others.  The example asserts that if

is a graded commutative polynomial algebra in one generator/variable, then

is a graded commutative exterior algebra in one generator, and vice versa.

The first confusion appears in a restatement of the Leibniz rule near the bottom of page 20, except this time there are tensors involved. This appears to be a mixed use/abuse of notation, which was slightly different in the first edition of the book, but not more consistent. The idea is as follows.

.  Then one can also write an element

(mind the inexplicable inconsistent choice of letters) as

since the degree of 1 is zero in each graded algebra. Note that this also allows us to regard

as graded commutative with the tensor product as multiplication between pure

comes with a differential

The thing is we really need not write the tensor product

; it is just as correct to write

on it’s own, as we often do with polynomial algebras and so on. Then the above can be written instead as

, it cannot act on just one side of the tensor. What’s different here is that the tensor product is actually the multiplication operation on each page of the spectral sequence. Thus, the restatement of the familiar rule with new notation.

Nevertheless, the next equality is also a bit confounding at first, partly because McCleary, goes back to writing the extra

in the tensor, suggesting that we need to pay attention to its effect. He says that if

which looks sort of reasonable as it resembles something like a chain rule,

. It is presented as if it should follow immediately from the Leibniz rule stated before. But this seems weird when the degree of

is odd. To be totally transparent about this, let’s illustrate the case where

, suppressing the subscript on the differential again, but maintaining the tensorial notation. 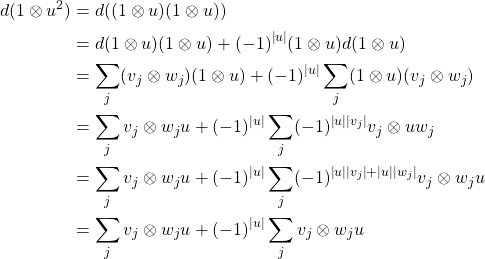 where the last line follows since

, so the sign inside the sum there has exponent

which is even. We see that if

has odd degree then, these terms cancel and we get 0. So you say “wait a minute, that’s not right, I wan’t my chain rule looking thing” until you eventually realize that if

has odd degree, since it’s sitting in a graded commutative algebra,

is actually zero! And the same goes for all higher powers of

has even degree, the terms will pile up with positive sign and we get the chain rule looking thing that was claimed. So the statement 6 is in fact true, though it really breaks down into two distinct cases.

Going forward in the example, McCleary only really seems to use the chain rule (liberally mixing in the described sort of abuse of notation) on terms of even degree, so it’s tempting to think that it only applies there, but it is sort of “vacuously true” in odd degree as well. Oh well. Onwards.